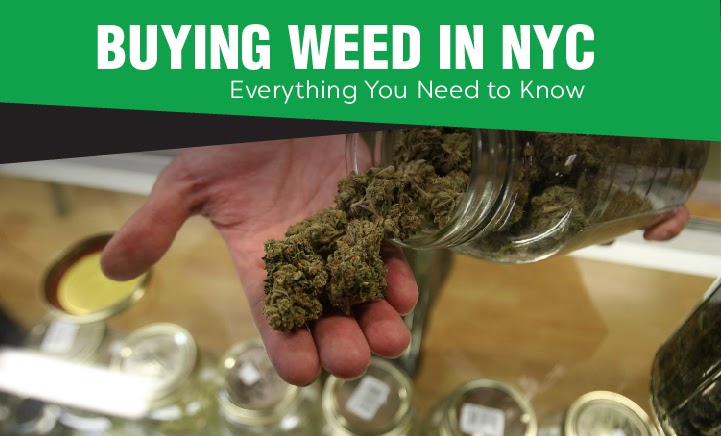 Buying Weed in NYC - Everything You Need to Know

When it comes to buying weed in NYC, there is both good news and great news.

The great news is that on April 30, the governor of New York signed legislation that legalized marijuana possession and use for adults.

Just like in other parts of the United States where marijuana has become legal, there is a process in place that you need to know to get exactly what you want.

This guide is designed to share everything, from where to buy to how to buy — and all the questions in between.

Is Weed Legal in NYC for Recreational Use?

Back in 2014, the state of New York legalized marijuana for medical use. This year, New York became the 15th state to legalize marijuana for recreational use too.

The new New York marijuana law created the Office of Cannabis Management and Cannabis Control Board to formalize and oversee the entire process.

But most people who enjoy cannabis still have a lot of questions. Is weed legal in NYC, for real?

Keep reading to learn the details, including spots like Legacy NYC Art & Cannabis Culture that make the buying process easy.

How Old Must You Be?

The first thing marijuana lovers need to know is that you must be an adult aged 21 or older to be able to possess weed legally.

Adults in this age range are able to possess and use up to three ounces of marijuana, or up to 24 grams of concentrated cannabis, for recreational use. Up to 5 pounds can be kept safely at home.

Do You Need an MMJ Card?

A medical marijuana (MMJ) card is no longer necessary to legally possess and use weed in New York.

However, some people still go through the complicated process of getting a card. To apply for the card, you must show documents to prove your identity and residency.

You must also have a qualifying medical condition and a patient certification from a doctor to get the card. But now it’s possible to skip all this. Where Can You Smoke Weed in NYC?

The Cannabis Control Board may create new regulations at any time limiting where it’s legal to smoke weed procured from an NYC dispensary.

But in the meantime, people who love marijuana need to know not only where to buy weed in NY but also where they can smoke it.

Here’s what you need to know after buying weed in NYC.

Currently, you are legally allowed to consume weed anywhere that tobacco smoking is allowed.

That means it’s fine in public places like parks and streets, but it’s not OK in schools, in workplaces, or inside a car.

You can also smoke weed in private homes, as long as the landlord doesn’t have specific rules against it. It’s the same for motels and hotels; if they allow it, you’re good to go.

No Smoking on Federal Sites

The main stipulation worth noting is that even in NYC or in the state of New York, you can’t smoke marijuana on federal land.

That’s because weed is still considered illegal under federal law.

How to Buy Weed in NYC

Since the law allowing recreational weed in New York went into effect relatively recently, the government is still going through the steps to license any NYC dispensary and making it clear how to buy weed in NYC.

Until state-licensed dispensaries are formalized, there’s another process known as “gifting” that makes it easy … just so you know what to do.

Gifting is How You Buy Weed in NYC

The state’s Office of Cannabis Management will eventually be responsible for licensing the cultivators, processors, distributors, and sellers of cannabis.

But the law already allows people to gift weed to one another.

This legal loophole is one way to buy weed in NYC and stay in compliance with the Marijuana Regulation and Taxation Act (MRTA).

The process is actually straightforward. You go into a store and buy something like a work of art, a T-shirt, a coffee mug, or an action figure.

The price of those items is in line with what you would expect to pay for marijuana. But instead of buying the weed, you buy the item and are given the cannabis as a free gift.

This process is used in the District of Columbia and other places where regulators are still working out the marijuana sale process.

It takes a lot less time and effort than the medical marijuana process, and you can still enjoy flower, concentrates, or other cannabis items recreationally.

Where to Buy Weed in NYC Now that you know where you can legally consume it, the next step is understanding where to buy weed in NYC.

It’s important that you look for a business that is transparent and compliant with the state’s MRTA so that you don’t find yourself in trouble with the law.

If a business isn’t aware of the steps to take for following the gifting protocol, it’s possible that you could buy a lot more than you bargained for.

Legacy is Where You Can Buy Weed in NYC

At Legacy NYC, you can choose from a wide range of gifts.

They offer pre-rolls of the popular OG Kush as well as Gelato Truffle, Caramel Apple, and El Blunto.

There is also a wide variety of edibles, including vegan gummies, Zanja Mint, Baked Bees, and a line of Uncle Paulie’s candies.

You can also choose from a wide a selection of flower, including sativas, indicas, and hybrids.

Some of the most popular flower strains are available, including Lemon Kush, Purple Punch, Sour D, and Strawberry Bliss.

The flower gifts range in price from $60 to $100, but there are often special promotions available that provide extra incentives to try something new.

The gallery is also known for its excellent customer service in helping people find digital art to buy. The Legacy Art Gallery also offers lectures and workshops for people to learn more about marijuana and art.

For example, the gallery is hosting a talk on legalization and small business sustainability that’s open to anyone over the age of 21 who is vaccinated.

Local New York artists are featured at the gallery, which also has book signings and live music concerts.

It is a cultural hot spot that mixes art with the cannabis culture that is growing in popularity throughout the United States.

To stay up to date with new gifts, merchandise, and events, both New York locals and visitors can sign up for Legacy NYC’s email list.

What Will Change for NY Medical Marijuana Patients

The same Marijuana Regulation and Taxation Act that made recreational marijuana possession and use legal will also result in some changes for medical marijuana’s NYC laws.

First, medical patients will have greater access to a wider variety of cannabis products and flowers.

Second, once the regulations have been formally adopted, certified patients and caregivers will be able to legally cultivate marijuana at home.

Until then, it is important that medical marijuana patients do not begin growing at home but instead seek out a NYC dispensary that is compliant with the law, like Legacy NYC.

The $50 registration fee for both patients and caregivers has been waived, and registered organizations can now provide up to 60 days’ worth of weed.

Soon, these organizations will be able to distribute whole flower products, and it will be easier to certify patients with new rules, too.

With the new rules, dentists, podiatrists, midwives, and other practitioners who are certified by the state to prescribe controlled substances to humans can certify patients.

Buying Weed in NYC: Easier Thanks to the New Law

Adults who are visiting or live in New York now are able to enjoy New York marijuana, thanks to the new legislation that makes it legal to possess and use marijuana wherever tobacco is allowed.

But knowing where to buy weed in NYC takes some research, and not every NYC dispensary is as transparent and compliant with the law as Legacy NYC.

Once you understand the process of gifting, you’ll know how to buy weed in NYC. Be sure to use the correct terminology by asking for a menu of products that include an MRTA-compliant gift.

Never ask to buy weed, as that is still within a legal gray area.

By being careful and going to the best shops, you’ll be able to enjoy cannabis in NYC even without a medical marijuana card.

NextWhere to Buy Weed in NYCNext